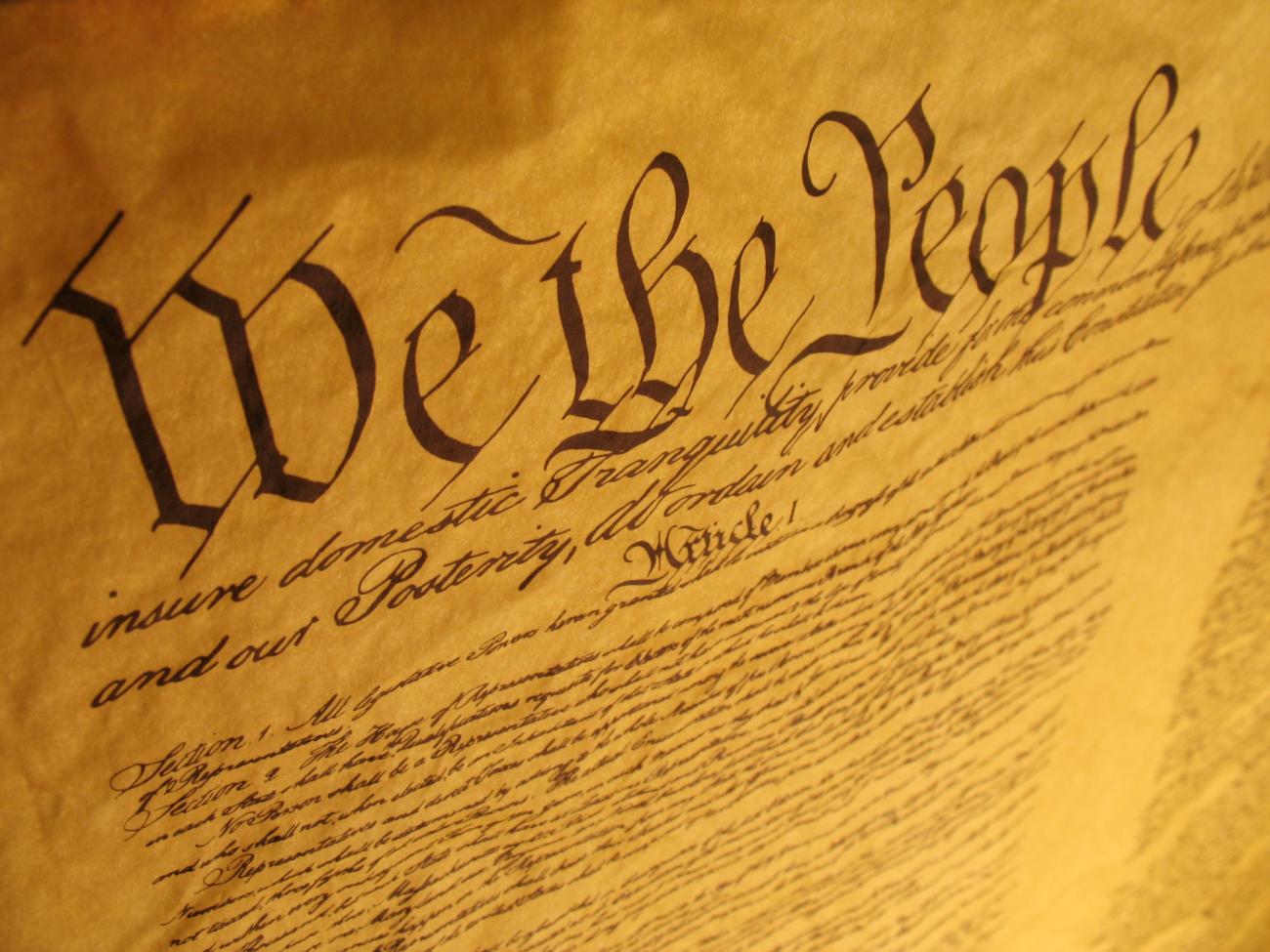 Section 1: Principles of the American Republic

Both the Declaration and U.S. Constitution can be read in less than an hour, and are essential reading for all citizens. Pocket versions of these texts are widely distributed by civic groups and are an especially convenient way to read them. Find out more about ordering United States and Arizona pocket constitutions here and view Arizona's Constitution here

The U.S. Constitution is the supreme law of the land, establishing the federal government, defining that government’s powers and structures, and protecting the basic rights of all Americans.

The Constitution creates the form of government we have in the United States, which is a constitutional and federal republic. A constitutional republic means that it is one in which, rather than directly governing, the people select some of their members to temporarily serve in political office; the constitutional part means that both the citizens and their governing officials are bound to follow the rules established in that Constitution. A federal republic is one in which a federal government is given only limited powers for limited purposes, while state governments retain most powers of government.  The Constitution describes this division of power, establishing which specific powers have been given to the federal government, while reiterating that most remain with the state governments.

Building off the ideas of self-government and “the consent of the governed” in the Declaration of Independence, the Constitution begins with “We the People,” announcing the purposes and goals of the Constitution, before listing the structures and protections of individual rights its authors designed to implement those objectives.

The Founders wrote the Constitution to ensure the government remained bound to its principles and promises, but they recognized that to be a lasting document, it would need to change. Thus, they included Article V, which describes the process of making an amendment — a change or addition to the Constitution, in which Congress proposes an amendment and the states ratify it.

Section 1.2: The Bill of Rights

The first ten amendments to the Constitution are known as the Bill of Rights and were ratified in 1791. These amendments limited federal power, by protecting both the rights of individuals and the authority of the states.

The members of the Constitutional Convention had originally argued that a Bill of Rights was unnecessary because of the doctrine of “enumerated powers.” (This doctrine means the federal government can only do what the Constitution specifically allows it to do.) For example, one did not need to specifically protect freedom of speech when the federal government had not been given explicit authority to restrict speech in the first place. Critics nonetheless demanded a Bill of Rights as an additional check and security before they would ratify the Constitution.

“The 4th of July is the first great fact in your nation’s history… Pride and patriotism, not less than gratitude, prompt you to celebrate and to hold it in perpetual remembrance… [T]he Declaration of Independence is the ring-bolt to the chain of your nation’s destiny; so, indeed, I regard it. The principles contained in that instrument are saving principles. Stand by those principles, be true to them on all occasions, in all places, against all foes, and at whatever cost... [And] interpreted as it ought to be interpreted, the Constitution is a glorious liberty document.”

These provisions initially applied only to the federal government, though most state constitutions had similar provisions applying to their state governments. (Many of these state provisions actually preceded and even served as models for the Bill of Rights). The Fourteenth Amendment changed this, making the first eight amendments also apply to each of the states as well—providing a floor of individual rights at both the state and federal level.

Although Congress has proposed other amendments, only twenty-seven (27) amendments have been successfully ratified by the states to become constitutional amendments.

Section 1.3 The Declaration of Independence

In 1776 the Declaration of Independence announced the independence of the 13 colonies from Great Britain. This was because, according to the Declaration, humans are “endowed by their Creator” with “certain unalienable rights,” especially “life, liberty, and the pursuit of happiness,” and Great Britain was not respecting the rights of the colonists. The Declaration explains that the very purpose of government is to protect these rights. Furthermore, it says that the people have the right to “alter or abolish” governments to protect these rights, and even to rebel against a government that systematically and consistently violated the people’s rights.

Most of the Declaration of Independence is a list of these abuses by the British government and the British refusal to correct them. This sustained refusal is why the colonists concluded that they were justified in turning to rebellion, as a last resort, in order to create new governments that would protect their rights."

Moreover, the Declaration of Independence asserted that ‘all men are created equal,’ meaning that no one has, by right, the innate authority to rule another. In order for a government to have legitimate authority, it must act with the consent of the people that it governs.

While the argument of the Declaration seems open to different forms of government that preserve the rights of the people, Americans increasingly came to believe that the principle that ‘all men are created equal’ entailed a republican form of government.

The Declaration’s ideas of liberty, equality, limited government, and self-government later served as important features of the Constitution. Other documents that shared these ideas and influenced the Constitution include important colonial documents such as the Mayflower Compact and Fundamental Orders of Connecticut, the Virginia Declaration of Rights, the debates between the authors of the Federalist Papers and their “anti-Federalist” critics, and the Iroquois Great Law of Peace (the constitution establishing the federal league of five tribes).

This tradition of political liberty is why the Constitution carefully limits government, such as by separating power into three branches of government: to ensure no part of the government can become too powerful.

The economic system of the United States is a capitalist or market economy, in which almost all businesses are owned and operated by private individuals, partnerships, and stockholders rather than by the government. Although the government can regulate the market, most decisions about what to produce, buy and sell, and at what prices, are made by consumers and sellers.

The “rule of law” is the idea that a consistent, and evenly applied set of rules, rather than the arbitrary will of those in power, binds all the members of society.  These laws must be made by proper procedures and published in advance of their enforcement.

The binding nature of law means everyone—not just citizens, but the government, its leaders and officials—must follow and obey the law. Indeed, lawmakers, judges, and officers of federal and state governments must take a specific oath to faithfully follow the U.S. Constitution.